I’m curious to know if our newly elected president has porcelain veneers or not. My best friend and I have been arguing about it for months. I say it’s porcelain veneers and she thinks he just whitens a lot. I suppose his teeth could be natural… after all, if he doesn’t fix his hair, why would he fix his teeth? Maybe it’s just the tan that makes his teeth look brighter? Anyway, we’d love some insights. — Danielle

Danielle,
Great question! It’s pretty safe to say that whatever he has going on, it’s not natural. Teeth do not come in that shade of white under any normal circumstances. However, repeated whitening could help him achieve that kind of brightness and, yes, having a tan matters as well. Darker skin and even bright red lipstick (not that we’ll ever see that on him) can create the illusion of whiter teeth.

However, it’s far more likely that he does indeed have porcelain veneers. It’s really hard to find an early photo of Trump smiling, let alone showing his teeth, but the photo here demonstrates it fairly well despite the graininess. 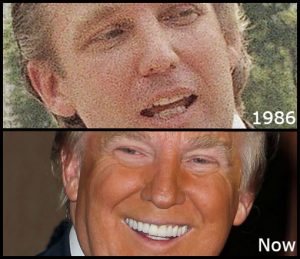 You’ll note that his earlier photo shows a small gap between teeth 6 and 7- those are on the upper left, but the gap is not present in the newer photo. There is also some unevenness on his top and bottom teeth- it’s quite noticeable on the bottom, but his teeth are very even now. Lastly, and you may not notice this because you’re not in the industry, his teeth now are longer than they should be. As people age, their teeth wear down. Cosmetic dentists often add length when they’re doing smile makeovers because it creates a more youthful appearance. It’s really hard to tell on the older photo, but his teeth appear much shorter there. So, in just comparing these two photos, it’s obvious he’s done more than whitening. There’s a chance these are actually crowns, but conservative dentists don’t usually do full coverage for cosmetic reasons.

An old story from the Daily Beast corroborates this, though it is only hearsay. In it, a tale from a New York dental office is retold:

“Do you know what these are?” he [the dentist] asked with a smirk. Then, without waiting for an answer, added: “Donald Trump’s teeth.”

The dentist said Trump would come to the office every six months or so complaining that his veneers weren’t white enough.

“I tell him that if they are too white, they won’t look real,” the dentist said, as I recall, “but he won’t listen. So he picks a shade, and I make them about one-quarter as white as the shade he selects, and he goes away happy.”

Based on the information available, you can count this as a win in your argument with your friend.

This blog is sponsored by Dr. Stephen Doan. Find out more about the services he provides by visiting his La Jolla cosmetic dental website.

P.S. – After posting this, someone let me know about a post on the mynewsmile.com website where Dr. David Hall tells the story of how Trump got his porcelain veneers from Dr. Larry Rosenthal, who apparently is the “Fancy Upper East Side dentist” that Daily Beast writer Ciro Scotti is referring to